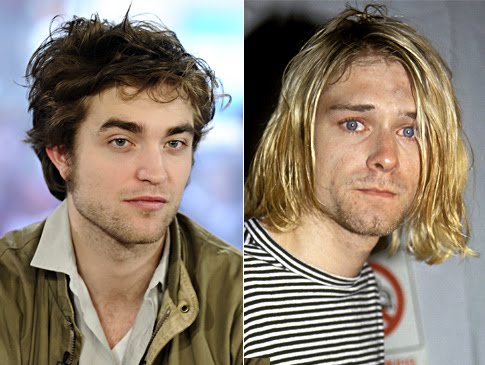 Robert Pattinson as Kurt Cobain in a movie? Say it ain't so!

MotherF**ker!! This must be the doing of Mrs. STD herself, Courtney Love. Ugh, I hate this C*nt. Hopefully, Dave Grohl slaps the sense into that bitch...and hopefully he does it with a bat! If this goes through there are going to be a lot of flannel wearing protesters outside of movie theaters all over America. That much flannel in one place? Uhhh, won't that be some sort of fire hazard? My neighbor is a fire inspector, so I'll consult him to make sure, but I'm pretty sure if someone tries to light a zippo and wave is in the air as some sort of seance to conjure up the spirit of the headless, I'm pretty sure it's going to be a HUGE mess, a smelly one too! Courtney Love? Yeah, because I'd Love to Court her off a cliff!
Posted by Seth Cameron at 5:30 PM